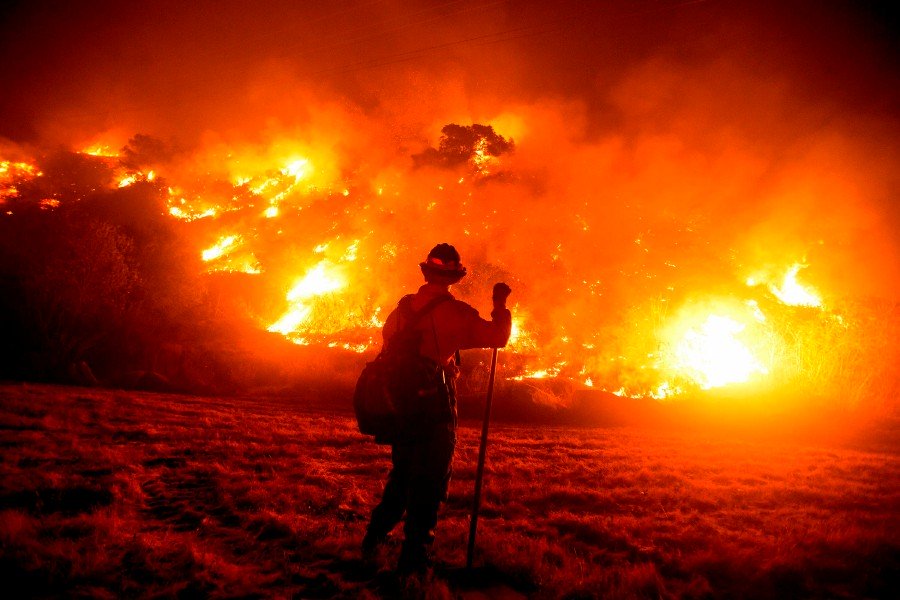 LOS ANGELES: Wildfires that have ravaged the US West Coast continued to rage on Wednesday as smoke from the deadly blazes spread across the country and even reached Europe.

"The scale and magnitude of these fires are at a level much higher than any of the 18 years that our monitoring data covers" since 2003, said Mark Parrington, senior scientist and wildfire expert at Europe's Copernicus Atmosphere Monitoring Service (CAMS).

He added that the fires are emitting so much pollution that thick smoke was visible over 8,000 kilometres (4,900 miles) away in northern Europe, showing how devastating the blazes have been in their magnitude and duration.

The heaviest smoke from the fires, which began mid-August in California, remains over the US West Coast.

California cities like Los Angeles and San Francisco as well as Portland in Oregon and Washington state's Seattle have registered some of the worst air quality in the world.

The majority of the fires are in California where fire officials said more than 17,000 firefighters were battling 25 major blazes and fire complexes, the term used for multiple blazes burning in one area.

One of the blazes near Los Angeles, dubbed the Bobcat Fire, closed in on a historic observatory Tuesday but crews managed to protect the structure.

"While there is still much work to be done in the southwest and in the northern sections of the fire, your firefighters did incredible work around Mt. Wilson today," the US Forest Service tweeted, referring to the observatory's site.

Apart from California, which has borne the brunt of the overall death toll which stands at more than 30, the coastal states of Oregon and Washington have also experienced record blazes that have encroached on major population centers.

In Oregon, 10 people were killed in the infernos fueled by dry conditions.

Rain was expected to bring some much-needed relief for parts of Oregon and Washington on Wednesday but the fire danger remained high in northern California.

The flames across the West Coast – some of which were caused by lightning strikes – have so far scorched more than five million acres (two million hectares) and displaced tens of thousands of people.

The disaster has brought the issue of global warming to the forefront of the US presidential campaign, with less than two months before the elections.

It has been difficult historically to prove a link between individual extreme weather events and climate change.

However, there is a growing evidence showing blazes like those in the US would not be so intense and widespread without the warming humanity has caused on Earth during the industrial age.

In general, climate change has been shown to amplify droughts that dry out regions, creating ideal conditions for wildfires.

The economic impact from this year's fires is expected to be staggering with one expert estimating the damage at more than 20 billion dollars.

Authorities have also warned that the smoke from the fires could worsen the coronavirus pandemic, as people forced to evacuate seek shelter in shared accommodation.

Inhaling smoke and ash could also further weaken the lungs of people infected with the virus and undermine the immune system. - AFP