Remembering the Father of Development 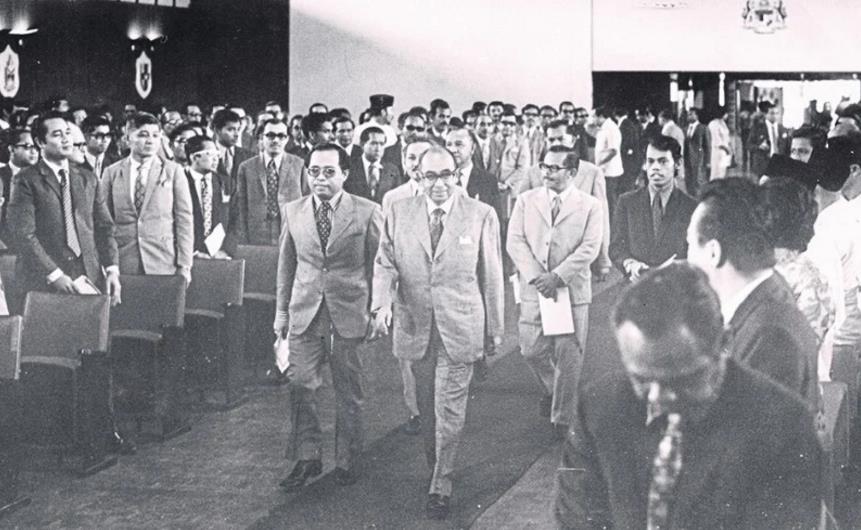 KUALA LUMPUR: Forty-five years ago, on Jan 14, 1976, Malaysia lost a Prime Minister who had poured his passion, high integrity and work ethics into developing his beloved country in the short six years he was in office.

During his visits, Tun Abdul Razak would befriend the people, check on their living conditions and their children's wellbeing and find out how his governance was impacting people's lives.

One of his officers, Tun Michael Chen, fondly remembered him as a 'people's person'.

"He travelled to remote places throughout Sabah and Sarawak during his tenure as the Defence Minister, to visit the soldiers based there.

"When he had met the soldiers, he shook their hands and asked 'Where are you from? Who is your father?'

"Subsequently, when he visited their villages, he would seek their fathers and tell them, 'I met your son recently. He is doing okay', which brought great comfort to the fathers whose sons were separated in carrying out their duty to the nation".

Setting a great example since his appointment as the Deputy Prime Minister, Tun Abdul Razak was a member of the entourage that had joined the negotiations in London that culminated in the country's Independence on Aug 31, 1957.

In his recipient speech, Tun Abdul Razak proudly thanked the RMAF, while conveying his confidence that the recognition would spur Malaysians to further and greater progress and achievements.

He would constantly find ways to improve the lives of the people regardless of their background or race.

The creation of Felda and Felcra to help those who lived in the rural areas, was one of his legacies, as he could relate to poverty and a hard life.

His personal experience in growing up as a 'kampung boy', in which he was paid two or three cents to look after his grandfather's buffaloes on weekends, made him a compassionate leader to Malaysians.

His other notable legacies include the introduction of integrated schools and low-cost apartments in the cities, to provide low cost housing for the people.

He realised that in any country, one race, community, or party should not be allowed to dominate over others, thus leading him to draw up his education policy that was fair to all races.

The raison d'etre of the Razak Education Policy was to bring about national unity, a crucial and important aspect of a polyglot, multicultural, multi-creed nation just coming into existence.

Tun Abdul Razak also realised that the best way to uplift the rural poor from their disadvantaged backgrounds was to educate them.

In 1965, he selected Tun Arshad Ayub from the Malayan Civil Service (MCS), for a special mission. to transform the Rural and Industrial Development Authority (RIDA) or Dewan Latihan RIDA, into an educational institution that would offer much needed skills to disadvantaged rural youths.

Having taken office after the resignation of the first Prime Minister Tunku Abdul Rahman Putra Al-Haj in September 1970, Tun Abdul Razak got to work right away, showing leadership in a country that was recovering from the racial riots in May 1969.

Personally, Tun Abdul Razak was well loved by the people, including his officers, during his tenure as Deputy Prime Minister and Prime Minister.

Tun Abdul Razak's aide de camp and personal bodyguard, Tun Mohammed Hanif Omar described him as a truly compassionate man of the highest integrity and honesty, who put the interest of the nation and the people above all else.

"He down-played his terminal illness. During his battle with leukaemia, he only let two people know of his health conditions, his then-deputy, Tun Dr Ismail Abdul Rahman and his personal physician, Dr Stuart McPherson...even (his wife) Tun Rahah Mohamed Noah, did not know.

"He had braved through his battle with leukaemia with stoic determination, so much so that he managed to keep it a secret from his family for a long time.

"As he underwent treatment in London, he was adamant not to return home until he was strong enough to stand up before the people".

When he passed away, the whole country went into a silent state for days, paying their last respects to the man who selflessly gave his time and dedication developing the country.

As a father and a husband, Tun Abdul Razak was remembered as a loving man.

Whenever he went travelling, he would always buy small gifts for his wife Tun Rahah.

However, he was always very cautious with his spending so as to not use any penny from the government's funds as he had always felt that he was an ordinary public servant with limited funds.

He was a dedicated leader who focused on honest work ethics and uniting the people regardless of their race and background. He realised that top leadership had to be multi-racial and he strived to form his cabinet with multiracial officers.

Tun Abdul Razak was known to all Malaysians as someone who shunned corruption and was also an approachable leader.

As soft-spoken as he was, his work ethics made those in his administration think twice before going against his words.

He made it a point to only appoint qualified and competent administrators, emphasising to them that they should always feel able to speak to those in power and be honest with their superiors, without fear of reprisal.

Dedicated and honest, he is also remembered as the Prime Minister who admonished his officers for mistakenly charging a tube of toothpaste on the government's tab while on an official trip outside the country.

A few prestigious universities around the world have named lecture halls after him, including Tun Razak Lecture Theatre at Oxford University's Blavatnik School of Government (BSG), United Kingdom.

Tun Abdul Razak is well remembered as a Prime Minister who displayed top notch leadership.His bravery in enforcing strict and honest work ethics, to ensure his vision for a better and well-developed Malaysia, has put the country on the world's map until today.