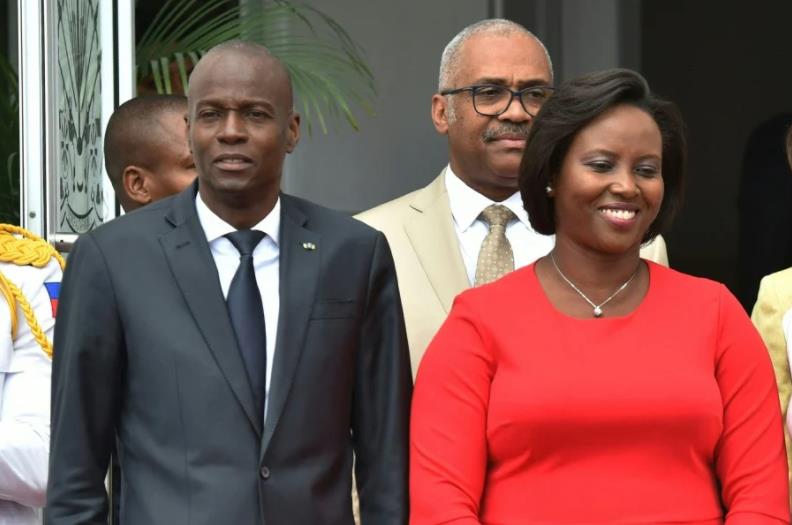 PORT-AU-PRINCE: Haiti President Jovenel Moise was assassinated and his wife wounded early Wednesday in a gun attack at their private residence, tipping the impoverished and crisis-hit Caribbean nation into a renewed state of political uncertainty.

Interim Prime Minister Claude Joseph declared a national "state of siege" and said he was now in charge of the country, urging people to remain calm while insisting the police and army would ensure public order.

As international outrage and shock spread over the killing, the airport was closed in the capital Port-au-Prince, but witnesses said the city was quiet on Wednesday with no extra security forces on patrol.

"The president was assassinated at his home by foreigners who spoke English and Spanish," Joseph said of the assault that took place around 1:00 am (0500 GMT).

"This death will not go unpunished," Joseph said in an address to the nation.

Moise's wife Martine, who was to be evacuated to Miami, was being treated in a local hospital.

Haiti's ambassador to Washington, Bocchit Edmond, told reporters the killers were "professional" mercenaries who disguised themselves as US Drug Enforcement Administration agents and may have already left the country.

"We have a video and we believe that those are mercenaries," he added.

Moise had ruled Haiti, the poorest country in the Americas, by decree after legislative elections due in 2018 were delayed in the wake of disputes, including on when his own term ends.

In addition to the political chaos, kidnappings for ransom have surged in recent months, reflecting the growing influence of armed gangs in the country.

The president faced steep opposition from swathes of the population that deemed his mandate illegitimate, and he churned through a series of seven prime ministers in four years.

Most recently, Joseph was supposed to be replaced this week after only three months in the post.

As well as presidential, legislative and local elections, Haiti was due to have a constitutional referendum in September after it was twice postponed due to the coronavirus pandemic.

The United Nations Security Council called an emergency meeting Thursday on Haiti, while US President Joe Biden condemned the killing as "horrific" and said Washington was ready to assist in any way.

"We condemn this heinous act, and I am sending my sincere wishes for First Lady Moise's recovery," Biden said in a statement.

UN Secretary-General Antonio Guterres called on Haitians to "remain united in the face of this abhorrent act and reject all violence," his spokesman said.

Just hours after the assassination, Joseph announced he had declared a "state of siege," which grants the executive additional powers. Haiti will mark two weeks of national mourning from Thursday.

European Union foreign policy chief Josep Borrell warned "this crime poses a risk of instability and a spiral of violence. The perpetrators of this assassination must be found and brought to justice."

Moise – a 53-year-old former entrepreneur who set up a string of businesses in the north of the country, where he hails from – burst onto the political stage in 2017 with a message of rebuilding the impoverished nation.

He campaigned on populist pledges, and was sworn in February 2017.

The end date of his mandate became the source of a political standoff.

The disagreement stems from the fact that Moise was elected in a 2015 vote that was cancelled for fraud, and then re-elected in November 2016.

Without a parliament, the country fell further into crisis in 2020, and led to Moise governing by decree, fuelling growing mistrust of him.

The United Nations Security Council, the United States and Europe had called for free and transparent legislative and presidential elections to be held by the end of this year.

The killing comes days after Moise appointed Ariel Henry, a neurosurgeon who studied in France, as Haiti's new prime minister.

Henry, 71, has been part of Haiti's coronavirus response and previously held posts in the government as interior minister, and social affairs and labor minister.

Henry is close to the opposition, but his appointment was not welcomed by the majority of opposition parties, who had continued to demand the president step down.

The Dominican Republic ordered the immediate closure of its border with neighboring Haiti after the assassination.--AFP