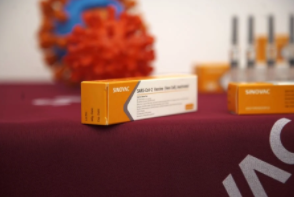 SAO PAULO: The Chinese-developed Coronavac Covid-19 vaccine has demonstrated a 50 percent efficacy following tests in Brazil, the organization in charge of its production in the South American country said on Tuesday.

Coronavac has been given to frontline health care workers in close contact with coronavirus patients.

The Butantan Institute repeated its claim from last week that the vaccine is 78 percent effective in preventing mild cases that needed treatment and showed 100 percent efficacy in staving off moderate to serious cases.

Overall it is 50 percent effective in preventing patients from contracting the disease, including very mild cases, although not asymptomatic ones.

"It's a safe, effective vaccine that ticks all the boxes to justify its use in an emergency," said Butantan director Dimas Covas.

The trial, which was used on 12,500 volunteers, did not produce any adverse effects or significant allergic reactions.

"If the vaccine resisted this test, it's going to work infinitely better on a community level," said Ricardo Palacios, the medical manager for clinical trials at Butantan, which is owned by Sao Paulo state and is the largest producer of vaccines in Latin America.

Although the vaccine has reached the minimum efficacy target of 50 percent set by the World Health Organization, it is well behind other vaccines produced by Moderna (94 percent) and Pfizer/BioNTech (95 percent).

It was followed just a few hours later by a request from the AstraZeneca/Oxford vaccine makers.

Coronavac has been at the center of a political dispute between President Jair Bolsonaro, who has repeatedly tried to discredit it, and its backer Sao Paulo state governor Joao Doria, who is expected to challenge the incumbent at next year's presidential election.

Brazil has recorded more than 203,000 deaths from Covid-19 and over eight million cases among its 212 million population.

Since November it has witnessed a second wave of infections.

Sao Paulo state is due to begin immunizing its 12 million citizens from January 25. Beijing has already sent 10.7 million Coronavac doses and the supplies needed to make another 40 million doses.

The health ministry, though, has yet to divulge when it will launch a nationwide immunization program.--AFP