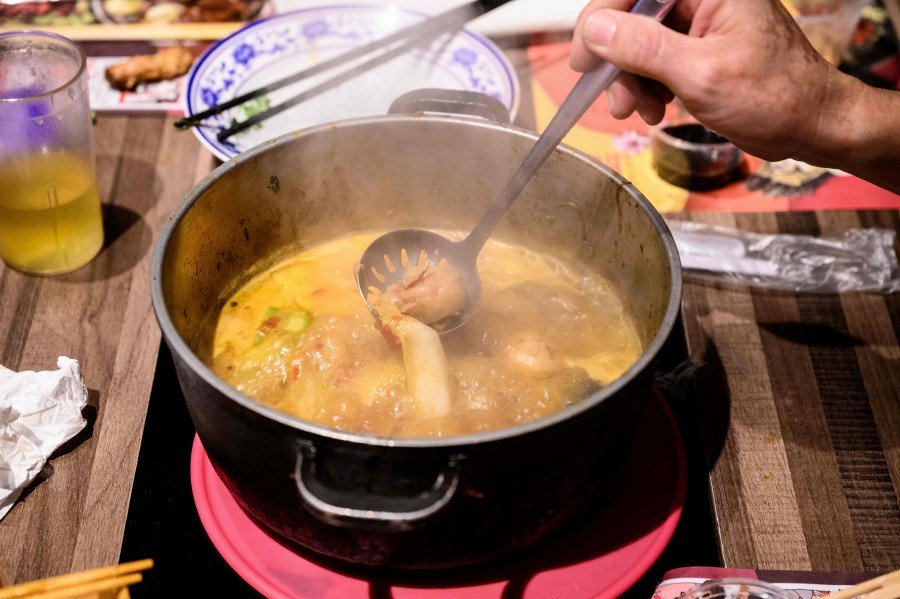 HONG KONG: Hotpot - also known as steamboat - has become the latest casualty of the Covid-19 coronavirus outbreak after ten members of a family in Hong Kong became infected after sharing the dish, a much loved favourite during winter.

Comprised of a vat of soup at the centre of a table, hotpot is a deeply communal dish.

Those enjoying it dip a variety of meats, seafood and vegetables into the bubbling broth which becomes more intense as the meal progresses.

But health experts have sounded warnings after a cluster of coronavirus cases were discovered in one Hong Kong family who all shared a hotpot with a carrier from mainland China over the Lunar New Year holiday.

As the tenth positive case was confirmed within the family on Monday, stocks for large hotpot companies with restaurants in Hong Kong and mainland China plunged.

Xiabuxiabu closed down 7.1 per cent, Haidilao ended 4.8 lower while Yihai International, which makes seasonings and sauces for hot pot, dropped 2.7 per cent.

In Hong Kong, major restaurant chains including Fairwood, Cafe de Coral, Yoshinoya and Maxim’s announced they were temporarily pulling hotpot from their menus.

Maxim’s also confirmed that two of the infected family members from the hotpot cluster worked in two of their branches, which would be closed for disinfecting.

Haidilao, China’s largest hotpot chain, has already closed all its branches on the mainland, where the virus outbreak has killed more than 1,100 people.

It said it would not close its Hong Kong branches but would start checking the temperatures of patrons.

Sam Wong, who owns 66 Hotpot, a family-run restaurant in the bustling district of Mongkok, said some 20 customers have cancelled bookings since the news of the family cluster emerged.

“I don’t think the focus should be placed specifically on hotpot considering the habit among Chinese people of communally sharing food,” Wong, 39, told AFP.

“But given hotpot is part of this cluster infection case, our business can’t help but be affected,” he added.

Wong said he was conducting thermometer checks on all customers, had placed disinfectant soaked floor mats at his restaurant entrance and was replacing reusable chopsticks with disposable ones.

Emily Mok, a flight attendant, came to Wong’s restaurant before it opened on Monday evening and ordered a hotpot for take-away.

“My boyfriend and I will have hotpot at home because we don’t want to consume it in a restaurant, where we don’t know who is sitting next to us,” she said.

Even before this year’s health crisis, Hong Kong’s catering industry had been battered by months of political unrest as Hong Kongers push for greater democratic freedoms and police accountability.

In the last quarter of 2019, when the protests were at their most violent, the catering industry suffered a 14 per cent drop compared to the same period last year, according to government figures.

Retail, tourism, and entertainment industries have been similarly hit.

Wong’s restaurant had weathered the unrest because he was a well-known pro-democracy supporter.

With protesters keen to support the businesses, Wong said he almost always had queues outside.